A homeland to numerous soaring mountain ranges, including the world’s highest peak, the Mt. Everest, this region will mesmerize a trekker with its grandeur. Peaks like Mt. Everest, Mt. Pumori, Mt. Lhotse, Mt. Thamserku, Mt. Tawache, Mt. Nuptse, Mt. Kangtega, Mt. AmaDablam, Mt. Cho Oyu and several other peaks will leave you spellbound. Trekking to the Everest Base Camp would be enthralling since it gives you a spectacular close up view of the world’s highest mountains, as well as an opportunity to explore the Sherpa villages and their lifestyles besides coming across magnificent high passes, valleys, rivers, monasteries and Buddhist prayer flags.

The most dramatic and picturesque landscape of Everest region has amazed the world making it mostly visited area of Nepal. The area is protected under Sagarmatha National park and is the land of the highest peak of the world, the Mt. Everest (8848m), Highland Sherpas and the Yeti. The national park is the home to huge wildlife including Red Pandas, snow leopard, musk deer, Himalayan Tahr, Marten, Pika (Himalayan mouse); more than 115 species of birds; high land plants like Juniper, silver fir, hemlock, pine, rhododendron, and alpine plants. Excellency in natural appearances has convinced the UNESCO to list this area in the World Natural Heritage Site in 1979 A.D. Meantime, culture and tradition of Sherpas living in this region have even popularized the place to visit once in a lifetime.

Just 35 minutes exciting flight from Kathmandu will take to Lukla airstrip from where a journey to Everest starts. The area is widely settled by the ethnic group Sherpa and follows Himalayan Buddhism. The valleys like Gokyo, Khumbu and Imja highly display the rich monasteries culture and traditions followed by highland dwellers. The places like Thame, Khumjung, Junbesi, Namche, Tyangboche, and Pangboche are the monasteries zone and hub of Sherpa culture. The major festivals celebrated by the Sherpa are Dumje, Mani Rimdhu, and Lhosar.

The Everest region offers different option for trekking to expedition from short and moderate to challenging climbing and expeditions. The mostly used trekking route is Gokyo, Kalapatthar Everest Base Camp Trek. No doubts, the area used wide alternate routes and even offer remote trail to Peekey and Hinku Valley. Even, follow the ancient salt-trade route to Tibet following the Gokyo valley trail from Thame, the ancient traditional Sherpa village; still see the Yak Caravans coming down toward Lumde from Tibet. Participate in traditional “Hatt Bazzar” held every Saturday is really interesting and a great experience of shopping home appliance for a week. For accommodation, choose from Budget lodge to luxurious and camping too. Likewise, get the plenty of shops and restaurants at Namche, Khumjung, Lukla even offers good internet and good options for meals ranging from local Sherpa Cuisine to continental, Japanese, Chinese to Italian Spaghettis and Pizzas as well.

Not Only stunning mountains views but also rich Cultures of the legendary Sherpa People!

The trekking trail of the Everest Base Camp includes the cultural and lifestyle of Sherpa people. Ancient Buddhist monasteries, rich biodiversity, glaciers with magnificent views of the Himalayas, deep Valley, stunning landscapes, and many more. Everest Region in Nepal is home for an ethnic group of Sherpa, where trekkers get an opportunity to encounter with rare and unique cultures, traditions, living pattern, lifestyle and so on. People show friendly behavior with visitors during trekking and lodging.

The best time to visit the Everest Base camp!

June, July, and August are monsoon season in Nepal, so Pre-monsoon and post-monsoon months are the best time to do the trek in Everest base camp, and the temperature is also okay to make our trek successful. The trekking welcomes to trekker with multi-color flowers and greenery, which will be able to eliminate tiredness of high altitude and make you always excited during your trek.  Apart from this beautiful scenery, trekkers and travelers also can have bright and magnificent views of the Himalayas from different viewpoints existed in the Everest Region. Make a vacation trip with joyful Trekking, we carefully organize 13 days itinerary to an accomplished stimulating expedition to Everest Base Camp.

The trekking trail of Everest Region!

This top Himalayas trek begins with views of the white and green Himalayas. It will be several steep uphills and downhills with the mesmerizing sceneries of the Himalayas in the backdrop. The visitor will explore several villages that come on the way like Lukla, the famous gateway to Everest trek, Phakding, a Sherpa village, Namche Bazaar, Tengboche, Dingboche, Lobuche Kalapatthar and Everest Base Camp. The trekking trail with the colorful several mini stones, Chhorten, prayers flags, wheels and many more, which will reward you. During our trekking, exploring spectacular mountains views from the Everest View Hotel, the famous viewpoint and exploring Tengboche Monasteries, Khumbu Glaciers, and the splendid Icefall is awe-inspiring. The EBC gives trekker an unforgettable satisfaction of the view and experience. After exploration of the world highest peak’s lap, you will return to Kathmandu by following the usual route.

The daunting white peaks soaring high in the sky have captivated numerous intrepid trekkers till date. These mighty snow clad mountains have witnessed frequent attempts to the summit. Everest base camp trek is an adventurous and a quite famous trek among the wanderlusts. Two base camps lie at either side of Mount Everest, the south base camp in Nepal and the north base camp in Tibet. The south base camp is often referred to as the Everest base camp due to its unparalleled popularity that attracts thousands of trekkers every year. Basecamp literally means the spot from where the mountaineering expedition is set out. This incredibly popular trek can be found on the bucket list of many travel enthusiasts and adventure lovers.

Offering spectacular mountain scenery, the trek to the south base camp starts from Lukla in Nepal, stretching up all the way to Kala Patthar, situated at the height of 18192 feet. Most of the people opt for aeroplanes to travel from Kathmandu to Lukla, while a very few also choose for trekking this way as well. This adrenaline pumping and heart thumping trek exhibit rough terrains, high altitudes and unparalleled views of the landscape.

The south base camp in Nepal is located at an altitude of 5,364 feet. The trek starts from Lukla, travelling up to the Sherpa capital of Namche Bazaar, which is located at an elevation of 11,290 feet. Climbers usually opt to take a halt here and get accustomed to the dropping Oxygen levels. From here the route takes the hikers to Dingboche, then further via Gorakshep to Kala Patthar. The journey downhill is quite enjoyable as there is no altitude sickness.

This trek is sometimes referred to as the 'Mother of all Himalayan Treks' because of its high altitude and the need for a level of physical fitness and mental readiness.

The duration of this trek varies depending upon the weather conditions and your level of fitness. It may range from 12 to 20 days.

in the months from June to August. In December, the temperature often dips to below-zero degrees.

You can choose to go on a solo trek or hire a porter or guide to accompany you on the trek. Although both options are feasible, going solo often is seen as a little risky. Many lone trekkers have disappeared on this trek in the yesteryears. Also, hiring a local guide helps you to learn about the tradition, customs and local lifestyle of the place. You can even get a package done by a travel agency for a hassle-free trip.

Trip Introduction Lobuche Peak Climbing is a well-known mountain peak climbing in the Khumbu region of Nepal. The peak contains two faces, namely; Lobuche East and Lobuche West, which is 6,119 and 6145 meters, respectively. As the climb is not so tough, it is a good option for beginners who are willing to trek for the first time in the Khumbu region and want to collect a climbing experience. Overview of the trip The stunning peak of 6,... 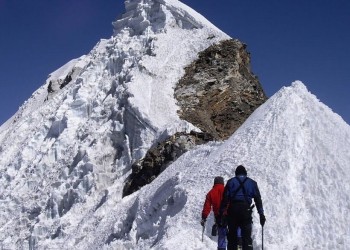 Trip Introduction Mera Peak is the highest permitted trekking peak in Nepal. At an altitude of 6476 meters, it is the most elevated trekking peak of Nepal. This adventurous peak will undoubtedly be a tough challenge to fulfill, but it can be overcome if you have enough stamina. It is a 21 days trek that will take you to the Himalayas of the Khumbu region. You can view the five 8000 meters peak from the summit like; Mount Everest, Cho Oyo, Maka...

Trip Introduction One of the most challenging climbs in Nepal is the Island Peak Climbing. Island Peak, also known as Imja Tse, has an altitude of 6189 meters and is a popular climb of the Khumbu region of Nepal. It is one of the classic trekking routes and comes with the Island Peak Climbing and Everest Base Camp trek package. However, you can choose the Island peak package only as well. Overview of the trip The total days you will re...

Introduction to the trip Ama Dablam is a mountain located in the eastern Himalayan region of Nepal, which has a height of 6,812 meters. In general, Ama means mother, and Dablam means necklace. Hence, Ama Dablam means the mother’s necklace. The peak has long ridges on each side, which looks like the arms of a mother protecting her child. Ama Dablam Peak climbing is one of the most famous adventure activities in Nepal. Trip Overview...

Introduction to the trip  The Everest Base Camp trek via Gokyo Chola pass trek is one of the most recognized trek in Sagarmatha national park. As the Gokyo Chola pass is the classic route for trekking to the Everest region, you will get to pass through the beautiful landmarks of the Kumbu region, which takes you to the stunning mountains along with vibrant villages and colorful monasteries. The Sherpas here are friendly, and you will also...

Introduction to the trip The Everest High Pass Trek is one of the most preferred Everest region treks as it takes you to the higher passes of the world. As you proceed to the Everest region by passing through the adventurous and high passes, you will get to view the beauty of the stunning Himalayas. The major attraction for the Everest High Pass Trek is the Cho La pass, Renjo La pass, and Kongma La pass. Overview of the trip In comparis... 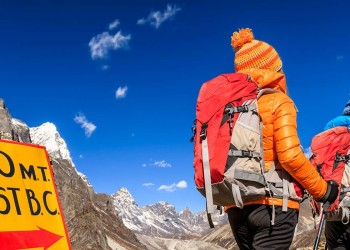 Introduction to the Trip If you want to explore the views of the Annapurna region through the less crowded area, you should ultimately try the Khopra Hill Trek. The Khopra Hill trek is popularly known as Khopra Ridge trek and is the best alternative to the Ghorepani trek that takes you to the viewpoints of the Annapurna region. It gives you a closer view of the stunning Himalaya ranges like; Mt. Annapurna and Mt. Dhaulagiri. Also, it is one of...

Introduction The short Everest Base Camp trek is for the people who have short holidays and want to trek to the Everest Base Camp. Although the trek is short, you will not miss the adventures that get covered in the trek. This trek leads you to the beautiful Sherpa villages of the Everest region and offers you the magnificent views of the beautiful Himalayas in the Everest region of Nepal. It is one of the most preferred treks for people will...

Everest Base Camp Trek Introduction Trekking to the highest mountain in the world is undoubtedly a great adventure. The Everest Base Camp trek will take you to the Sherpa villages of the Himalayan range of Nepal, introduce you to the Sherpa culture and the local people. You should not miss the breath-taking scenes of glorious mountains during the trek. Make yourself ready to experience the wildlife of the World Heritage Site listed by the...